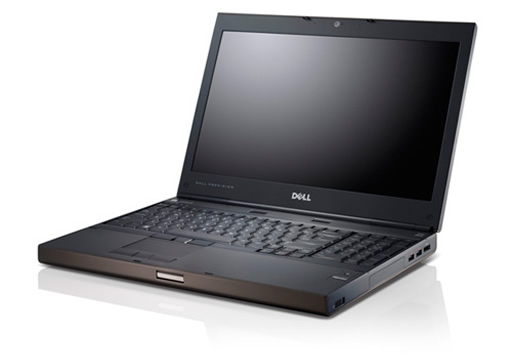 The Dell Mobile Precision M6600 workstation with 17.3” UltraSharp 1920x1080 display is an excellent portable platform for video editing. It’s powerful, quiet, runs cool and has a big enough screen to allow for a pretty solid work flow without constantly resizing elements on the display. The built-in speakers provide enough volume but may fool you a bit on the EQ so pack a trusted portable monitor or pair headphones to help with the audio mix.

We received the M6600 just before leaving for CES to shoot a series of videos for SanDisk. Our software package included Sony Vegas Pro 11, Adobe CS5, Sorenson Squeeze, Edius 6 and a variety of music creating and sound editing tools. Also on the trip was a Mac Pro with Final Cut Studio. We had 24 hours to create several videos so redundant systems were a necessity.

After a full day of shooting we had to edit through the night to get the finished videos on the web the next day. The M6600 was a true workhorse. We had edit timelines open while rendering MP4s, WMVs and uploading to FTP for approval. The i7 combined with the CUDA cores of the Quadro helped keep everything running smoothly. The bottle neck was not render speed but rather the upload connection governed by the hotel. Our personal hot spot was less than effective in Vegas and the connectivity issue was exasperated by the CES crowd that tends to bring the network to its knees every year. Send a text and wait 4 hours for a return message.

The M6600 is a pretty decent machine, however we did encounter a minor annoyance with the power management and sleep state feature of the M6600. We normally turn off power management on our PCs in general and manually turn things on and off avoid going into a sleep state at the wrong time. We attempted to do this with the M6600 but the system still managed to put itself in a sleep state on its own form time to time. Not a big deal except that it sometimes got hung up when waking and once kicked an external drive off line and had to be rebooted.

With a retail price in the 3-4k range for a decent configuration the M6600 offers very good performance in a bulky yet portable package. We’re looking forward to more advanced designs that reduce the weight and footprint yet maintain and improve the performance with advanced chip sets and flash memory.

One of the things we've been doing during Covid is listening to more vinyl. It's been…

It's been a while since we needed a KVM switch and man have they evolved nicely. The ATEN…

So your Mackie mixer finally died. Now what? There are a lot of options on the compact…

Will Ferrell Takes on Norway

Can't wait to see what GM starts rolling out. Love the ad. A next level dammit, lugers…

The Really Nice Compressor or RNC1773 from FMR Audio in Texas is just that, really nice.…

The ÖRFJÄLL swivel office chair from IKEA is a good chair and good value at $49. We…

Laser printers are usually found in the office while inkjets are more common in the home.…

The Hydrasynth is a powerful new digital synth from the folks at Ashun Sound Machines,…

A really cool little cottage. Would be amazing to have this as a creative studio out back.

This USB 3.1 Gen 2 SATA drive dock is one of the better made USB docks we've tested that…

Best Hard Drives for your NAS…

When it comes to editing you need speed, reliabilty and capacity. You also want to use…